I was all ready to sit down to finish a post I was writing about Annie’s infatuation with the Muppets, when I was beckoned by my daughter’s heartbreaking sobs to her room.

Since we’ve been back from our trip from Poland, we’ve been having a little bit of a hard time with the regular bed-time routine. Since we’ve returned we still do all the things we used to do. Bath. Medicine. Brush teeth. Bedtime stories. Hugs and kisses. At least one lullaby. Tuck her  into her crib and get her kinder music playing. And usually she puts herself straight to sleep.

But for the eight days we were gone, Annie got used to falling asleep in our arms or laying between us. She’s having a hard time putting herself to sleep. For the past week, I’ve been resorting to having to get her out of her crib and laying with her until she falls asleep. I’m not worried. This kid has traveled so much and had to readjust so many times; I know we’ll be back on track soon enough. But the sooner the better.

So tonight, instead of caving and getting her out of her crib, I decided I’d lay in the bed and just be in the room with her. Within seconds of me entering the room, she had reached her hands to the top of the crib and pulled her little self up to a stand!

I’ve been feeling guilty lately, because when we travel, Annie’s therapy gets put on hold. This is actually the longest lapse in therapy we’ve had. When we were home for almost two months we decided to take a break. Sometimes her American therapist and her therapist here in Italy have very different approaches on things. For instance her American therapist pushes a bit harder, whereas our Italian therapist would rather do things ver slow but completely correct. (I’m actually sure she’d be appalled that Annie’s knees aren’t more bent in the stand she held tonight.) While we love both of her therapists, she sees her Italian therapist much more and we like the “slow but steady wins the race” approach. So when we returned in early September we were anxious to get back in the routine with her. But unfortunately Annie’s therapist has been very sick and we’ve been having a hard time finding a sub. So I’ve been playing the role of physical therapist along with the students and Mike’s colleagues. She hasn’t seen her therapist in over three months. Much too long!

For the past two months we’ve been seeing so many “almost’s” as far as pulling to a stand is concerned.

This one’s from just a few days ago.

Every time we go away though, it seems as soon as we get back home, she makes a huge improvement. And tonight, once again after a long trip away, she’s reached another milestone. And like there always is when she accomplishes even the littlest things, there was exuberant celebrating. 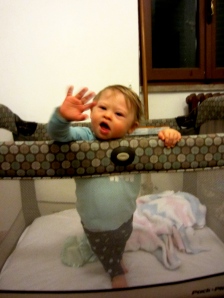 Annie can be pretty stubborn. I’m not sure that the next time we’ll see her do this will be any time soon. When she was eleven months she got up on all fours with her belly off the ground and did the “I’m getting ready to four-point crawl” rock back and forth for almost two full minutes. We were ecstatic! Her therapist ensured us this meant she was ready and would be crawling on all fours any day. Eight months later we’re still waiting!

She’ll get there, just like I know she’ll be pulling herself up to a stand in her crib again.

Goodnight from one happy momma!