Today’s guest blogger is my sister Kaylea. I am the oldest of six children: three girls, three boys, in that order. Kaylea is the youngest of the sisters. She along with our sister Molly is so much more than a sister, my closest and best friend. For the three years before we moved to Rome, Kay was off living in Florida studying to become the kick-butt attorney she is today.  So we didn’t get to see her that often. Now, we see her even less. (Though she is currently tied with Molly for most visits to Rome with three visits each!) We treasure every moment with her. She is my rock when I start to crumble; she never fails to bring the fun when days seem dim. I see so much of her personality in Annie. Zia Kaylea, we love you and miss you so much! 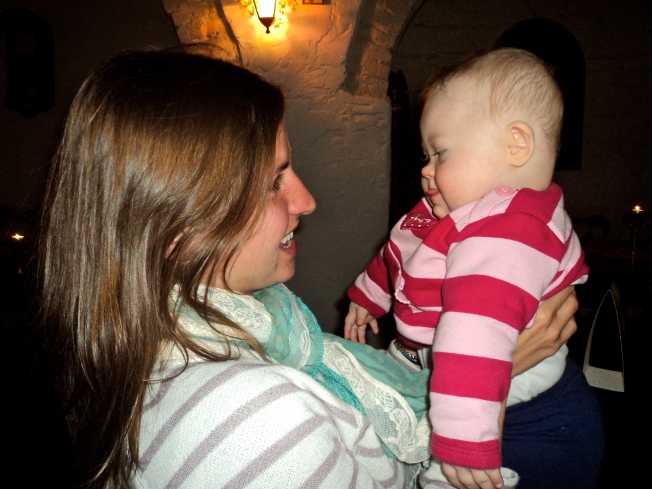 I’ll never forget the moment I found out I was going to be an aunt for the first time. My sister Molly and I were the first to hear the news, which was only shortly after Colleen herself saw the double pink lines on that little white stick.  It was the day of Colleen and Mike’s big going away party, almost exactly one year after another unforgettable party celebrating their matrimony.  Now, if you’ve ever been to a party at the Weiler house, you know that the phrase “quite the ordeal” is a major understatement. And I’m not talking about the parties we kids threw when mom and dad were out of town… although those were fun too! I’m talking about the REAL Weiler parties that my amazing dad somehow manages to find the time and money to throw together at least once a year.   REAL Weiler parties seldom have fewer than 100 guests in attendance, never end before 2:00 am and usually start the night before, as dozens of cousins and friends come over to prep the food (stuffing sausages and cabages and rolling out the dough for homemade pasta, mixing the batter for potato pancakes and/or making buckets full of sangria), clean up and more importantly drink lots of beer! 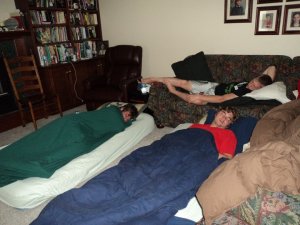 What my parents’ living room looks like on nights before and after REAL Weiler parties. All beds, couches, and floor space are filled to maximum capacity.

So of course on the day we had the big send-off for Colleen and Mike, there were at least twenty people at the house by 10 am (when the party was to commence at 3:00 pm), and there was a LOT of running around to do.  At that point it had not even hit me that my oldest sibling was about to leave the country indefinitely.  So when Molly and I returned from a hectic beer run that involved three shopping carts full of beer, wine, liquor and snacks, and twenty minutes of freaking out because we had lost the car keys somewhere inside the huge grocery store, we weren’t thrilled when the first thing we heard as we pulled in the driveway and attempted to start unloading was “Girls, Colleen says she needs you and she says it’s urgent.”  Then as we walked in the house, carrying all the purchases we’d made for HER party, we heard Colleen shouting our names from the top of the stairs, wrapped in a towel.  We both immediately said, “Coll- it doesn’t matter what you wear, you will look beautiful in anything.”  We really thought the important thing she needed us for was fashion advice.

So after attempting to ignore her yells for fifteen minutes or so, we finally ascended the stairs to see what the emergency was all about.  She handed us the little white stick with a purple cap and asked, “Is this positive?”  Now the second pink line was slightly faded, but it looked like a pretty clear positive to me.  I immediately became teary-eyed, started jumping for joy and hugged my oldest sister.  Molly, the nurse, had a very different reaction.  She told Colleen that before she gets too excited, she should go to the doctor to see for certain and to make sure everything was going ok. 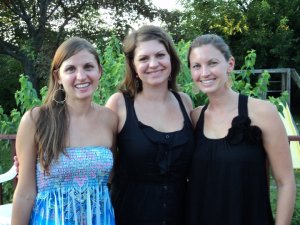 From left to right; Kay, me, and Molly on that first day we found out about Annie. Mike was the only one who knew that day as we were surrounded by hundreds of family and friends to say goodbye.

Rewind to March of 2009.  A few weeks after my wonderful brother-in-law proposed to my sister, he sat me down and asked me what I would think if he one day got a job in Italy and had to take my sister away with him.  I, thrilled that he valued my opinion, answered that although I would miss them greatly, I would also be 100% excited for them and would seize every opportunity to come visit them.  What hadn’t crossed my mind at that moment were all the things I wouldn’t be there for.

It wasn’t until a year later when I helped my pregnant sister check in at the Alitalia counter at the O’Hare airport with her four enormous suitcases, not knowing when the next time I would see her would be, that I realized what all this meant.  I would have to see her first ultrasound picture over the internet, I would have to hear the news learned at each doctor’s visit over Skype or email, I wouldn’t get to feel my niece or nephew kick inside her belly and most disappointing of all, I would not be in the hospital with my sister when she became a mother for the first time.

Still, when on April 1, 2011 at approximately one in the afternoon (Miami time), I received the news, by way of a phonecall from my mother, that I had a niece named Anne Kathleen Beazley, I was overwhelmed by emotion.  I was extremely happy and excited to be an aunt, but at the same time I was sad and almost felt guilty that I was not there with my sister.

It wasn’t until the morning of April 2, 2011 that I found out about Annie’s diagnosis.  As I revisited the pictures of the tiny bundle I had just seen fewer than eighteen hours earlier, I looked at them in a different light.  I analyzed them thoroughly.  “But she doesn’t LOOK like she has Down Syndrome.” “Yes, I guess her arms look kind of limp at her side, whereas other newborns clasp their hands close to their face…but she JUST DOESN’T LOOK LIKE SHE HAS DOWN SYNDROME.”  “Maybe that means it’s only ‘mild’” “Maybe she’ll be more like a ‘normal’ child than most other babies with Down Syndrome.” Looking back, I cannot even believe I had these thoughts.  SHE LOOKS LIKE ANNIE, and she’s beautiful.  And she gets more and more beautiful every day.  She has Colleen’s bright blue eyes, Mike’s button nose and light redish-blond Beazley hair.  She is part Weiler and part Beazley, part Colleen and part Michael, and she is 100% ANNIE.  The “Down Syndrome features” that she does display do not make her any less beautiful.  They do not define her.

As I analyzed the pictures of Annie’s first days, a new emotion came over me.  I was scared.  I was frightened and nervous for my sister.  I was terrified about the life she now had ahead of her, a life that would be much different than the one she dreamed of.  Scared for the challenges she would face.  But most of all I was scared because she would have to face them without me and Molly and Mom and Dad and Danny and Tommy and Bubba.  And although I was scared for her, I knew that she would be able to handle it.  And I said to her the only thing I could think of to “console” her.  I said, “Colleen, we have always known that you and Mike are going to be amazing parents.  God gave Annie to you because he knew that if there were any two people on this earth that could handle this, it’s the two of you. You can provide so much for her.  You can teach her so much.”  And of course I meant these things and believed them to be true.

But I was wrong.  It was Annie that would teach us so much.  And I should never have had to “console” my sister for this gift that turned out to keep on giving and giving and giving.  And yes, Colleen and Mike are amazing parents, but God didn’t give them Annie because he knew they could “handle” her.  He gave them Annie because Annie would bring more light and love to their lives and to the lives of so many people around her than anyone could have imagined.

In a previous post, my brother Danny wrote about the well thought-out things HE said to Colleen after hearing of Annie’s diagnosis. I don’t know the exact contents of that email he sent to her eighteen months ago, but I know that one thing he said was something along the lines of “Annie is going to be so loved by so many people.”   And we all know I RARELY admit when this happens, but DANNY WAS RIGHT.  I just don’t think even he knew how right he was at the time.  Although I am sad every day that I am an ocean away from my sister, brother-in-law and niece, I know that every day Annie is surrounded by so many students, teachers, faculty and even Italian strangers who absolutely love and adore her. And she gives them so much love in return. 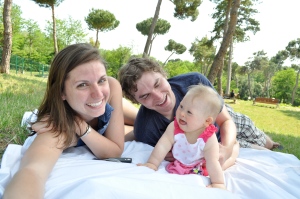 Annie with Aunt Kay and Uncle Danny in our neighborhood park in Rome.

This weekend, I had the honor of spending a little bit of time with the 94 year old grandmother of one of my best friends, Sandy Reitman.  When our friend Jon asked this incredible woman if she had any advice for the younger generations, she calmly responded, “I live my life based on two words.  ‘Attitude’ and ‘Acceptance’, and if you have one then you’ve got the other.”  As I thought about this later on, I realized that a one-year old baby girl with Down Syndrome had already taught me this very same thing, although she wasn’t able to communicate it to me in words as elegantly as could Mrs. Alicia Reitman.  Annie accepts absolutely everyone with open arms and a smiling face, and as she does so, she teaches others to be accepting as well.  Annie doesn’t discriminate, and neither should we.

Grab This Button
Join 1,071 other followers